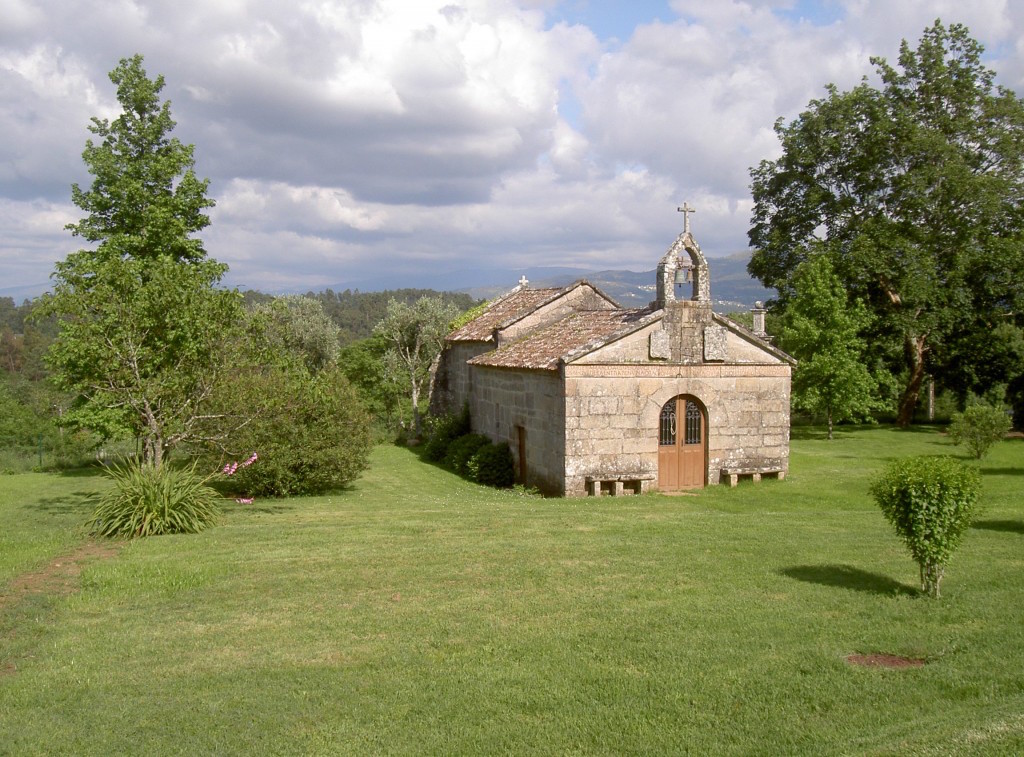 Back in May, 1989, I had the opportunity to go with two other sisters on a pilgrimage to Lourdes. One of my most profound experiences during the trip was not connected with the shrine itself but with a side trip the three of us made to a popular resort called Givarney, located high up in the Pyrenees Mountains. At one point during the day, I wandered off by myself to explore a rough trail leading a bit further up the mountain. It led to a tiny chapel. It was open. I went inside and discovered that I was in a historic spot. In centuries past, the chapel had been a stopping place for pilgrims on their way to the renowned shrine of St. James the Apostle at Compostela in Spain. As I knelt there alone in the silence I was overcome with a tremendous sense of being connected with that centuries-long procession of pilgrims and with St. James himself. The impression was heightened because at the time my brother was pastor of St. James Church in lower Manhattan. The line stretched out in space as well as in time.

In the spring of 2011 a man named Harold Camping created a sensation with his prediction of a May Judgment Day when a limited number—144,000—would be saved and everyone else doomed. I kept contrasting this stingy view of salvation with the expansive vision of the saved in the Book of Revelation—a vast multitude which no one could number. The 144,000 are just one little segment. Of course, John is using symbolic language. Nevertheless, the vastness of the vision makes me think of God as the Hospitable One, who, in the words of the popular hymn, has “hands swift to welcome, arms to embrace.”

The scene in Revelation also calls to mind some Gospel scenes; for example, the one where Jesus comes down from the mountain after having named his twelve apostles and finds an immense crowd gathered to hear Him and to ask Him to cure their sick—which He does. Then there is the one where Jesus is told that his mother and brothers are waiting to see Him and He answers: “My mother and brothers and sisters are they who hear the word of God and keep it. I hope that Mary and the other relatives heard the statement not as rejection of their place in his life but as an invitation to expand the family boundaries to include the likes of us.

Another implication of that great scene in Revelation is that the present life is only a beginning. Death is not so much an exit (though it is that) as a transition, a doorway to another stage. It is not totally accurate to say of someone who has died: “His/her life’s work is done.” Consider the case of Jesus Himself. As he said to the disciples he met on the road to Emmaus, his death was the door through which He entered the glory of his Resurrected Life. In the Creed we proclaim that He now sits at the right hand of the Father. The image sounds passive, but in truth He is active. He is there to intercede for us. He is present, He tells us, wherever two or three are gathered together, and in a particularly intimate way when they gather to celebrate the Eucharist. Through his Spirit, alive in us, the members of his Body, He is actively working to bring to fulfillment the dream He taught us to pray for: Thy Kingdom come. Thy Will be done on earth as it is in heaven.

Think too of Mary. On the feast of the Assumption this year I was much struck by the thought that we were celebrating the climax of her story but not the end. She is not only called blessed by all generations, as her cousin Elizabeth foretold. She blesses all generations. Think of all the prayers that have been directed to her down the centuries. She continues to care for and to mother innumerable children. She is approachable. She listens to each one of us.

I often think of St. Therese’s promise: “ I will spend my heaven doing good on earth.” She saw herself after death as sending “showers of roses” down on those still on earth. She does. I have experienced “roses” in the form of answered prayer, but perhaps even more significant have been the occasions when some of the opinions she expressed so confidently in her autobiography have been a help or an inspiration. One example, is the idea that God always gives us just the amount of strength we need at any given moment—no more, no less. The thought recurs whenever the outlook for the future looks confused or overwhelming. Sometimes, even, Therese sends literal roses.

And what about Anthony, who seems to be always on duty? He does wait to be asked, however. I remember one especially frigid Friday in January spending hours searching the retreat house for the thermostat key I knew I had dropped somewhere between the office and the thermostat in Lower East. Finally, I gave up. That night, as the retreatants were coming in, Anthony finally came to mind. I said a quick prayer, and almost immediately spotted the key lying on the dining room carpet.

Naturally, deceased people do not have to be among the elite company of the canonized in order to act as our friends and helpers and teachers Somewhere I heard or read the sentence: “Death does not end a relationship.” This is true in some obvious ways. We would not be here at all if it were not for our parents, grandparents, and the whole long line of our more distant ancestors. Also, the influence of those who have formed us or befriended us, whom we have loved—or, for that matter, hated—remains always. Their decisions, their opportunities or lack of them, their beliefs and values have in some way determined the circumstances of our own lives. In the case of those we have known in the flesh, we have memories, or objects that belonged to them, their wisdom, perhaps their writings, that speak to us each day.

The Cause of our foundress, Elizabeth Prout, is under consideration in Rome, but we do not have to wait for the final outcome to ask her to be a heavenly advocate for her religious family and for the whole network of people with whom our lives are intertwined—friends, family, retreatants, students, etc., etc. As Sisters of the Cross and Passion, we have committed our lives to living out her dream. Surely she is still interested, probably a lot more interested than any of us is. In fact, I cannot help but believe that all of those we have loved and admired are still interested. They do not forget us, even if and when we, amid all the distractions of our daily life, may forget them for a time.