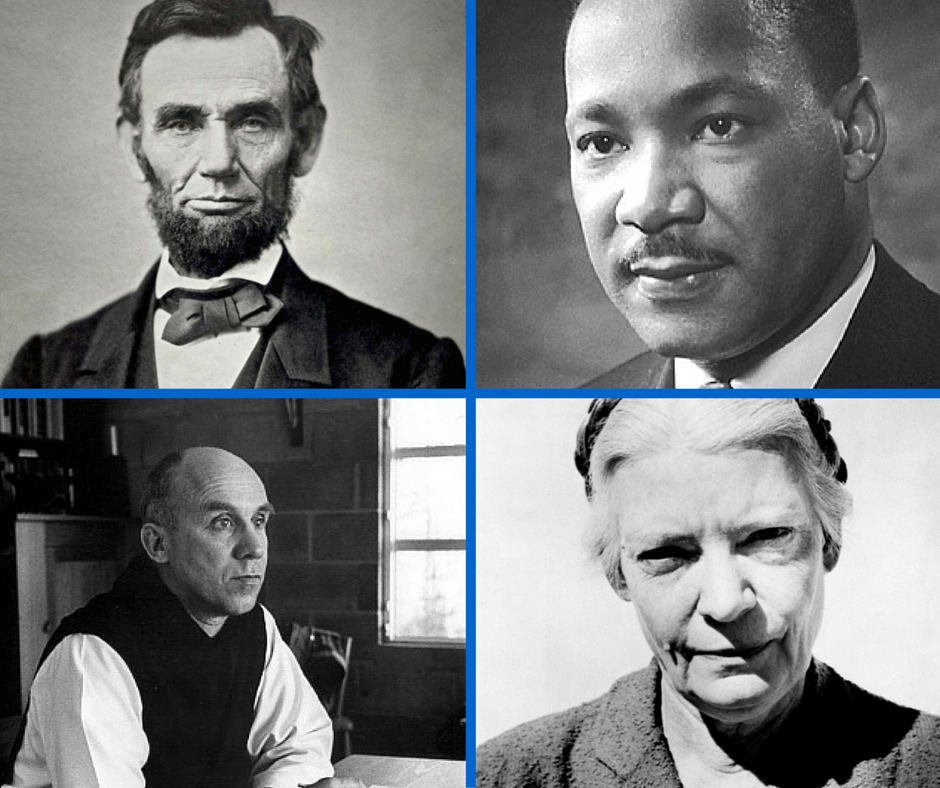 During his visit to the United States in September 2015, Pope Francis became the first pope ever to address the U.S. Congress. He spoke eloquently of the history of our country as a land of freedom and opportunity, and he articulated his hope that even in these turbulent times in the world, the United States would continue to represent these values to the world.

In the course of this address to Congress, Pope Francis named four Americans whom he set before us as models worthy of imitation. The four were Abraham Lincoln, Martin Luther King, Jr., Dorothy Day and Thomas Merton. Each of the four was, in his or her own circumstances, a reconciler who sought to bring about peace where there was no peace.

Abraham Lincoln was the 16th president of the United States, elected in November 1860, and re-elected in November 1864.  His presidency coincided with the Civil War, which began with the battle of Fort Sumter in April 1861, and ended on April 9, 1865 following the Battle of Appomattox. Lincoln was assassinated just five days later, on April 14, 1865.

Pope Francis, citing Lincoln’s Gettysburg Address, spoke of Lincoln as a guardian of liberty who labored tirelessly that “this nation under God might have a new birth of freedom.” Pope Francis went on the mention the value of dialogue over polarization, and the idea that building a future of freedom requires love of the common good and a spirit of cooperation.

The second American pointed out by Pope Francis was Martin Luther King, Jr. who led the non-violent movement for civil and political rights for African-Americans in the 1960’s. Dr. King was awarded the Nobel Peace Prize in 1964. He was assassinated in Memphis, TN on April 4, 1968.

Pope Francis spoke of Dr. King’s dream of equality for all people as a dream that still inspires so many today. He said that this dream of equality awakens what is deep and true in the life of a nation. Pope Francis expressed happiness that America continues to be, for so many, a land of dreams that lead to action, participation and commitment.

The third American cited by Pope Francis was Dorothy Day, the founder of the Catholic Worker Movement. She was born in New Yok City in 1897, and throughout her life worked tirelessly on behalf of the poor and oppressed. As Pope Francis said in his address the Congress, Dorothy Day’s passion for justice was inspired by the Gospel, her faith, and the example of the saints.

What began for Dorothy Day as a newsletter, The Catholic Worker, became a nation-wide system of houses in which the poor and homeless were welcomed as “ambassadors of God.” Day was a pacifist, as was Martin Luther King, Jr. In the 1960’s the Catholic Worker supported the civil rights struggle, to the point of Catholic Worker houses in Georgia being violently attacked by the Ku Klux Klan.

By the time of her death in 1980, Dorothy Day was regarded by many as a saint. Her autobiography, The Long Loneliness, first published in 1952, is still in print. The cause for Dorothy Day’s canonization is now in process in Rome. She is quoted as saying “If I have achieved anything in my life, it is because I have not been embarrassed to talk about God.”

The fourth American mentioned by Pope Francis was Thomas Merton who, after a very turbulent childhood and youth, lived the last decades of his life as a Trappist monk. Pope Francis described Merton as a source of spiritual inspiration, a man of prayer and dialogue, and a promoter of peace.

As an author, Thomas Merton is remembered for his more than seventy books, many of them dealing with spirituality, social justice and pacifism. His autobiography, The Seven Storey Mountain, was first published in 1948, and remains widely read today. As a contemplative and a mystic, Merton is remembered for opening dialogues between Christianity and the great religions of the East, especially Zen Buddhism. Merton died in 1968, while in India participating in an inter-religious symposium. He is buried at the Trappist Abbey of Gethsemane, in Kentucky.

The visit of Pope Francis to the United States was certainly a well planned and well considered event. Consequently, placing these four Americans before the entire country as examples of virtue can be taken as a very deliberate move. What was the message Pope Francis wanted to give us, especially during this Year of Mercy?

Perhaps delving more into the life and work of Abraham Lincoln, Martin Luther King, Jr., Dorothy Day or Thomas Merton will provide us with several different insights and responses. The qualities cited by Pope Francis included dialogue, tolerance, compassion, understanding, social justice, peacemaking. What qualities can you find in these four great Americans?