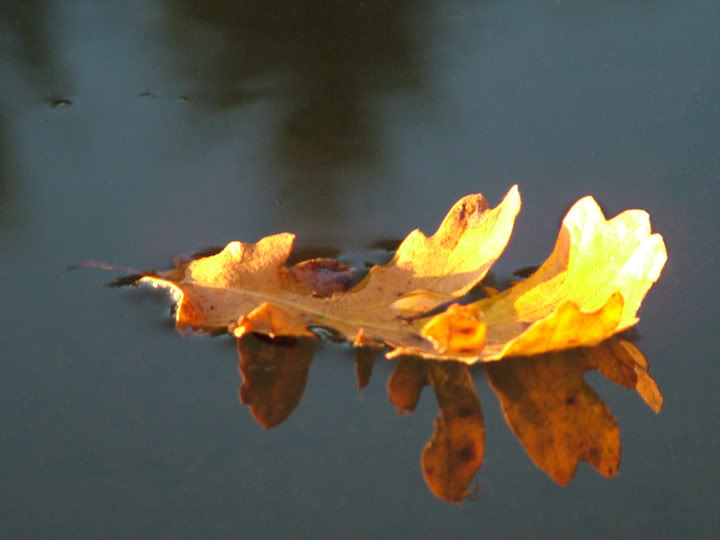 Ia, or Hya, was an Irish woman who went as a missionary to Cornwell in England in the fifth or sixth century. She planned to accompany three monks Gwinear, Fingar, and Piala, but when she arrived at the departure point she found that they had already left. This is what happened next, as recounted in Edward C. Sellner’s Wisdom of the Celtic Saints,(pp.146-147)

When she discovered that she was too late, she was filled with grief and knelt down on the beach to pray. As she did so, she noticed a little leaf floating on the water. Ia touched it with the rod she carried to see if it would sink. Lo! It began to grow larger and larger as she looked at it. Believing it was sent to her by God, and trusting in him, she embarked upon the leaf and was immediately wafted across the Channel, reaching her destination before all the others.

The tale is, on one level, an entertaining example of a playful imagination run wild. Yet it teases us to reflect more deeply. The storyteller, like other Celtic chroniclers, is not so much interested in setting down a factual account of what really happened on that voyage to Cornwall as in bringing us in touch with the living personalities of the saints. Ia was a determined woman of unquenchable faith, a chosen woman on whom God’s favor rested. Notice the reference to the Father’s words at Jesus’ baptism. Like all the saints Ia was Imago Christi, an icon of Christ.

This is not to discount the extravagant humor and delicate imagery of the account. The picture of Ia gently touching the leaf, watching wide-eyed as it expanded, and trusting it to bear her weight is delightful. There is also the subtle social commentary. We are tempted to wonder, “Did the monks deliberately plan to set out early so as to leave Ia behind. Is Ia’s arriving first a feminist victory?

It is not the only one recounted in the annals of the women saints. The treatment in the story of Canair’s visit to the monk Senan at his monastery on Inis Cathaig is more blunt:

“Now, when she had reached the shore, she walked upon the sea as if she were on smooth land until she came to Inis Cathaig. Senan knew that she was coming, and he went to the harbor to welcome her.

‘Go to your sister who lives on the island to the east of this one, so that you may be her guest,’ said Senan.

That is not why I have come,’ said Canair, ‘but that I may find hospitality with you on this island.’

‘How can you say that?’ asked Canair,’ Christ is no worse than you. Christ came to redeem women no less than to redeem men. He suffered for the sake of women as much as for the sake of men. Women as well as men can enter the heavenly kingdom. Why, then, can you not allow women to live on this island?’

‘You are persistent,’ said Senan.

‘Well then,’ Canair replied, ‘will I get what I ask for? Will you give me a place to live on this island and the holy sacrament of Eucharist?’