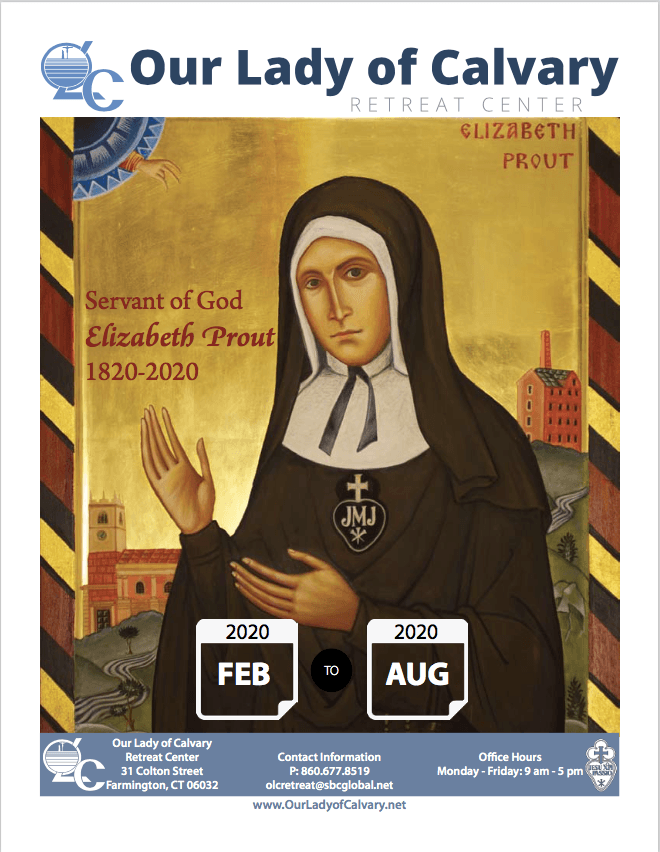 The latest edition of OLC’s Program Guide features an icon of Elizabeth Prout, foundress of the Sisters of the Cross and Passion.

Our Lady of Calvary Retreat Center is a ministry of the Sisters of the Cross and Passion.

Elizabeth Prout was born in September 1820, in the city of Shrewsbury, England. Her father was a cooper, a barrel maker, and earned a good living. In the English society of the day, the Prout family would have been considered middle class. Her father’s employer-provided housing and Elizabeth, their only child, regularly attended school. Anne, her mother, was Anglican, and Elizabeth was baptized in the Anglican Church soon after her birth.

History tells us that there was much religious upheaval in England from the time of Henry VIII who reigned from 1509 to 1547, and into the 19th century. Only in 1829 were all the laws calling for the persecution of Catholics repealed. However, anti-Catholic sentiment remained strong for many decades.

We know that when Elizabeth was in her early 20’s, she became a Roman Catholic. This was a courageous act on her part, and it had serious implications in her life. Most importantly, her parents disowned her. They were upset and embarrassed that their daughter had become a “Papist,” as Catholics were known, and they and Elizabeth became estranged.

Following her reception into the Catholic Church, and because Elizabeth did have the benefit of some education, Elizabeth was invited by the pastor of the local Catholic parish to undertake a teaching position in a Catholic school. This enabled her to be financially independent. It was this work as a teacher that drew her to the poor children in and around the city of Manchester, in central England.

At this time, the mid-nineteenth century, Manchester was changing drastically due to what we now call the Industrial Revolution. Factories were being built, and the cheapest source of labor was women and children. Because of such rapid development, there were no labor laws, no protection for the workers, no requirements for safety equipment, no minimum wage standards, and no restrictions on the number of hours worked. There weren’t any laws against children, even as young as six or seven, being employed in the mills, sometimes up to eighteen hours a day. These conditions existed, in part, because there was no public education system.
It was into this environment that Elizabeth Prout went, with all her courage and faith, and her intense desire to serve God and the poor.

Within a few years, she was joined by other young women with the same high ideals, and in 1852 a new religious community was established, built upon the foundation that Elizabeth Prout had put in place. She and her companions worked tirelessly. There is documentation explaining how Elizabeth walked from one end of Manchester to the other to help with or to establish schools for the poor.

Elizabeth and her companions also showed special care for the women who worked in the factories. They provided an education which the women would not otherwise have received, and they opened hostels – what we might call boarding houses – to provide women with safe places to live. Because what the sisters did was given for free to the poor, some of the sisters themselves went to work in the factories right alongside the other workers, in order to earn money to support their charitable works.

Just twelve years after establishing her religious community, Elizabeth Prout died on January 11, 1864, of tuberculosis. She was 42 years old. Her community was still small, only twelve years old, but following her example, the sisters continued to teach the poor and continually sought to serve where there was a need.

Sisters of that same community, the Sisters of the Cross and Passion, still following the courageous path of dedication and sacrifice traveled by Elizabeth, left their homeland behind and came to America in 1924 and began working in the Diocese of Providence, and then came to the Archdiocese of Hartford. In addition to the United States, the Sisters of the Cross and Passion have carried the charism of Elizabeth Prout from England to Chile, Argentina, Peru, Botswana, Australia, and Vietnam.

Elizabeth Prout, or Mother Mary Joseph, as she was known in her community, is now being considered for canonization. The first stages of the canonization process have been completed, and her title is “Servant of God.” This means that her life has been studied in great detail, especially with respect to the theological virtues of faith, hope, and charity. In faith, she joined the Catholic Church, despite the trials it brought into her life. In hope, she entrusted her fledgling Congregation to God when she learned of her terminal illness. In charity, she dealt with criticism and harsh treatment from those who did not understand her vision for her Congregation.

September 2, 2020, marks the 200th anniversary of Elizabeth’s birth. Sisters of the Cross and Passion throughout the world will be celebrating the anniversary in various ways, and also joining in prayer that the cause for her canonization will continue to proceed successfully to the next designation of “Venerable Elizabeth Prout.”

Click here to watch a video about Elizabeth Prout.